A few months ago I offered to babysit two goldfish and a dwarf frog while their family was moving.  The goldfish became too big for the tank, so I got the 3 of them a bigger tank.  Initially, everyone seemed happy in their new home. Three days later the frog started hiding behind the filter and not swimming like usual.

By the next morning, the frog was in the same place so I cleaned the old tank and put him in by himself.  I left for work grateful knowing I had an appointment with Ann that evening.

Of course, top of my list was to ask Ann about The Frog!  I shared the story of The Frog’s situation with Ann asking her what The Frog might need.  She replied (in typical Ann fashion) “ask him!” That never occurred to me even though I work with people and animals—just never a frog!

My appointment with Ann included opening up the energy to all living things.  So after the session, I went to The Frog and asked to show me his energy which was collapsed onto itself.  So my ever growing Light cleared The Frog, and the two goldfish from The Frog, then I opened up the energy of all living things with the new energy of The Frog.  I was then able to ask him what he needed because he was full and present. 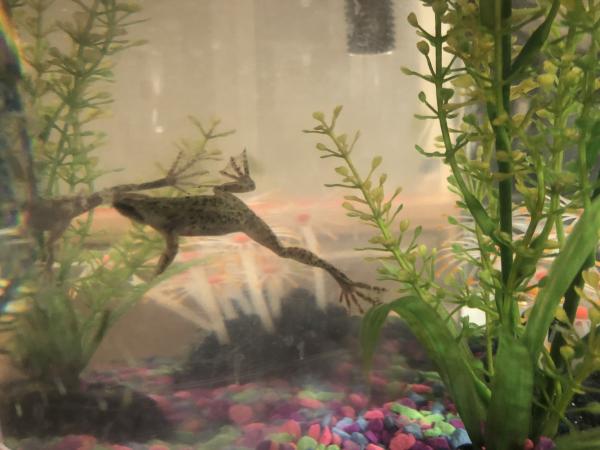 He said he needed time to recover from the 'new tank'. 30 minutes later he was swimming around like he used to!  I love seeing him swim supported by the energy of all living things—as we all are!

Stay tuned as my next question will be “do you want another fish or frog to join you? “